You are here: Home / CLOUD / Key metrics to consider when assessing the performance of your VDI/ DaaS environment

Virtual Desktop Infrastructures (VDI) or Desktop As A Service (DaaS) services are a modern and flexible way to provide fully configured desktops with preinstalled applications that are ready to perform, to organizations. It is very important to be able to measure the actual performance of the service.

When you have desktops that perform poorly, most likely your co-workers and your boss won’t be happy, and you as an IT admin will perhaps have a hard time explaining that. That’s why it is important to know how to measure performance of VDI/DaaS infrastructures and which key metrics to look at.

With the help of performance monitoring software that actually simulates the opening of documents, users click on buttons, or opening and closing applications, you can test the real performance of virtual desktops before rolling them into your production environment.

What areas to consider when looking for performance impact

If you have already onboarded your organizations and your co-workers you should troubleshoot some areas which shows you performance bottlenecks.

When troubleshooting a bad performance of VDI, you should consider few keys areas. It is important to look at least three things:

Which resources and metrics are present in each virtual infrastructure?

Memory – RAM in physical hosts and allocated virtual RAM of your VM(s). When you do have enough physical RAM within your cluster but your VDI desktops, your VMs are configured with not enough virtual memory, they most likely they’ll perform poorly. A VM with 2Gb RAM will most likely use SWAP memory to disk which slows down the performance. You might do some savings of your physical RAM, but the performance suffers. Make sure to allocate enough RAM to user’s desktops that runs CAD/CAM and (or) multimedia applications because those are memory hungry.

CPU – physical CPU(s) installed on each host determines directly how many VMs with you will be able to run per host and with how many virtual CPUs.

GPU – Graphical Processing Unit (GPU) is an important factor as well. Make sure to assign enough graphic resources to desktops running applications running rich graphics, or applications used by high-end designers and scientists. Those workers require usually some high-end virtual GPU (vGPU) to make sure that they have a positive user experience.

Storage – While storage was a main problem in the past when spinning medias were used. Nowadays with Solid State Disks (SSD) using either SATA, SAS or NVMe protocols, those problems occur much less frequently. The main reason is the speed that the information can be written to disk and then read back. Most modern hardware produces a performance that is usually a magnitude better than what use to be possible on arrays using spinning media.

Different types of VDI allows also to have virtual desktops always-ON. This prevents boot storms in the morning when most of the employees starts to log in.

Network – important role of VDI and DaaS infrastructures plays also networks. Monitoring network throughput within the datacenter and also in the cloud will give you essentials information on performance and will help you to determine speed requirements. Each server or host has an uplink that might not have sufficient capacity throughput. If the server hosts hundreds of VMs and each VM consume network resource, it adds up quickly so make sure to request latest physical Network interface cards with capacity 40/60/100 Gbs. Older 10Gbs cards that were just fine few years ago starts to fall short because the density of VMs running on each individual host increased.

How does the user feel that the system that he/she’s working with isn’t enough responsive. We have some metrics which can be measured and sorted giving you an idea which desktops performs poorly and which are fine to work with.

Application response time – The idea is here to see the lowest latency when user click on a button within their application. Bad case scenario is when the user clicks the button and the system shows him/her a “hour glass” waiting for several seconds. Ideally, there should be no to very low delay.

Application load time – the time that Office documents are loading and opening. By double clicking an Excel sheet, the user should not wait 15-20 seconds to fully open the document. With modern VDI/DaaS systems those actions should be almost instant.

Logon Duration – the first opening a system. When user logs on, the waiting time should be reasonably short. User should not be waiting like 2-3 minutes before the possibility to start their application.

Graphics Quality – The user should benefit from the same quality as he/she would work on a physical PC. Nowadays, VDI systems can handle multiple monitors with high resolutions if the backend VMs are configured with enough graphics resources.

Virtual desktops are maintained by a DaaS provider that takes care of the technical and logistical aspects, including the onboarding, maintenance, and 24/7 support. AnuntaTech with DesktopReady uses Microsoft technology to provide build, scale, operate, and easy to use cloud desktops specifically to SMBs. 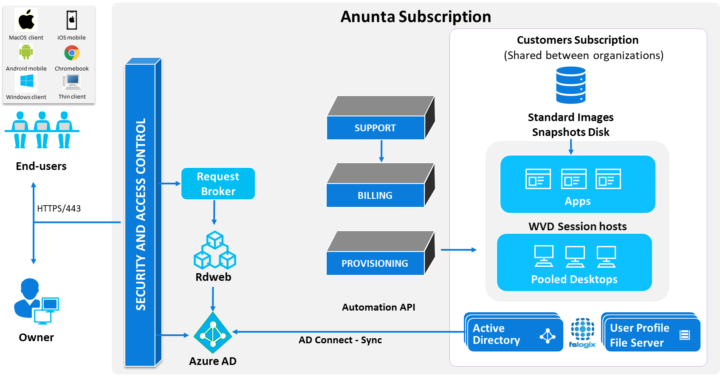 VDI and DaaS systems are the way that organizations work now. We have seen a massive adoption of cloud desktops because it allows organizations to stay competitive even during pandemics. This mass adoption brought some new challenges for IT admins that needs to be aware of the basic resources that each DaaS system needs for functioning.

IT administrators should look for software tools that are capable of measure the user experience metrics such as logon duration, application load time and so on. By measuring those metrics during test period many admins can prevent themselves a lot of headaches and problems with poorly chosen virtual desktops or DaaS provider.

Check out AnuntaTech that has a Desktopready DaaS service that runs virtual desktops with Windows OS.