, and Universal Parks and Resorts, to use low power wide area networking (LPWAN) technology for IoT projects at its Orlando location.

Using MachineQ’s integrated hardware and software platform, which is being fully deployed at the Orlando resort, Universal’s operations and IT teams are able to quickly test and launch IoT projects designed to increase operational efficiency in the park.

“We’ve identified multiple applications where MachineQ’s low-power IoT platform can deliver data to us faster than previous methods, and we’re seeing the positive impact that can have for our teams,” said Bill McCorey, Senior Vice President, Chief Information Officer, Universal Parks and Resorts.

“We’ve conducted a number of pilots for different use cases, and have plans to put several of them into production in Orlando. As our teams continue to take advantage of the MachineQ platform, we anticipate more adoption from our internal teams, and even greater efficiencies as a result.”

The MachineQ platform provides IoT hardware and software tools that will be accessible across the entire Universal Orlando Resort. With the network in place, wireless sensors that can detect temperature, location, energy consumption, and more, and can be affixed to park assets that operations teams want to monitor or control, such as food refrigeration units, fleet vehicles, and utility meters.

Once activity is recorded by a sensor, it relays that data wirelessly to a MachineQ gateway, which in turn can be delivered over the internet to a digital dashboard used by park operations and IT staff. With this information at park operations teams’ fingertips, new efficiencies can be realized in the management of the park. Examples of these efficiencies could include optimizing maintenance schedules, identifying anomalies in the consumption of utilities, or understanding usage patterns of fleet vehicles.

“While we offer a growing number of pre-defined IoT solutions, we are excited to see businesses, such as Universal Parks and Resorts, leverage our platform and APIs to rapidly build and customize solutions unique to them,” said Alex Khorram, General Manager of MachineQ.

“Universal’s adoption of IoT to enhance the guest experience and drive operational efficiencies is similar to what we’ve seen in other industries where digital transformation is happening – such as agriculture, multi-dwelling housing, manufacturing or food service. Once the platform is deployed, and organizations learn more about the technology and the ability to add new connected use cases with relative ease, the positive impact on the business becomes very real.” 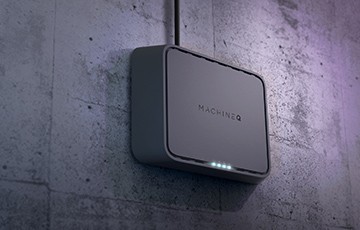 The engineering team at Universal is leveraging MachineQ’s public APIs (Application Programming Interfaces) to build an application that connects storage lockers at the Volcano Bay water theme park. In addition, Universal is piloting a solution to use IoT sensors to improve management of its food and beverage inventory at the Orlando resort using more data.

Future use cases for leveraging the platform could include smart outdoor lighting, tracking mobile assets like golf carts, and water leak detection.

MachineQ’s B2B IoT platform is deployed using LoRa® network technology. LoRa-based networks are similar to cellular or Bluetooth, but are better-suited for IoT use cases because they require less power and have the ability to send data over wider geographic areas and into hard to reach locations like deep indoors or underground. These characteristics are a primary reason why Universal will be able to cover its entire complex with 15 MachineQ wireless gateways, and why solution providers across the globe are building equipment and solutions that leverage the LoRaWAN® protocol. For more information, visit www.machineq.com.